KISAR will not be holding a membership meeting for the month of November. Everyone have a great Thanksgiving!

KISAR will hold a training on Saturday, November 16. We will meet at Bayside Fire Hall at 9 AM for a briefing before proceeding to the end of Monashka Bay Road at White Sands Beach for an orienteering and small-team search training at Termination Point. 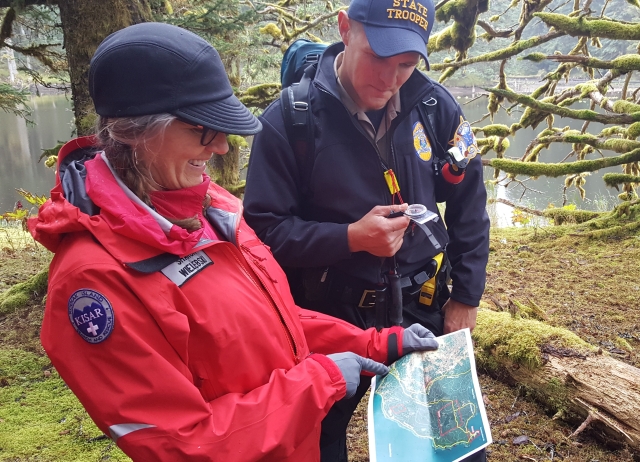 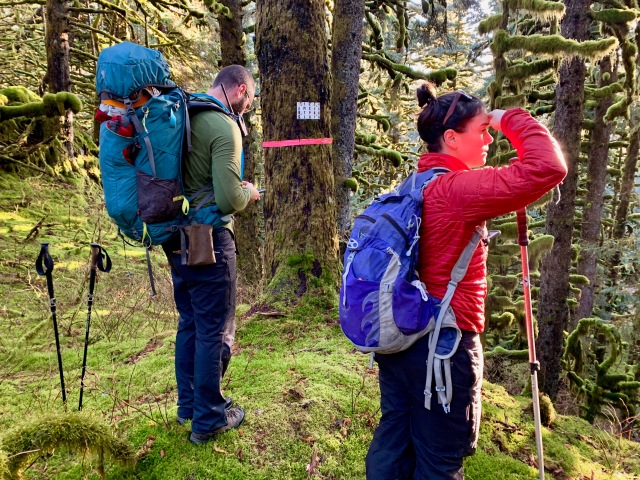 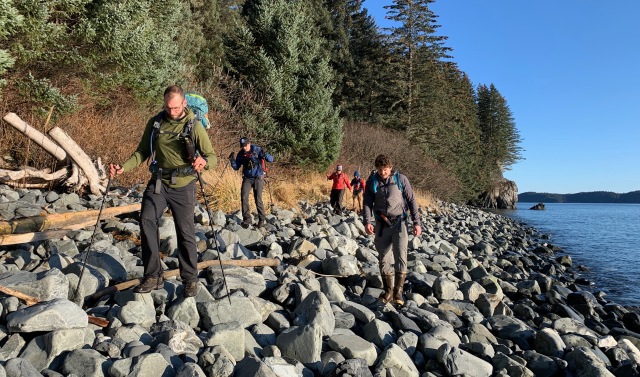 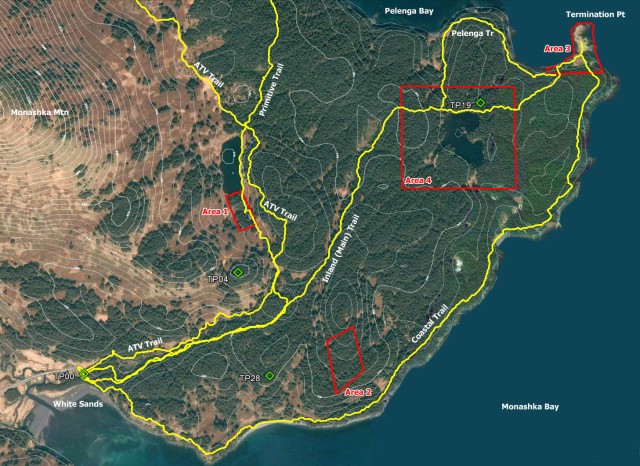 After the meeting we will go over the National Association for Search and Rescue (NASAR) mobile phone app for search and rescue field operations. This app is a very handy step-by-step guide for most SAR operational steps. We will focus on the Initial Actions section which covers the first 12 hours of a SAR case which is also the subject of Paul Anderson’s Initial Response Incident Commander (IRIC) training. The app costs $2 to download. NASAR Search & Rescue Operations Field Guide

For KISAR’s August training, a number of members headed out to Anton Larsen Bay to rock climb on a granite wall. It required a short boat ride and was mostly meant to be a fun outing but also teach basic top-roping and belay techniques. Beautiful weather and a scenic area made for a fun and productive outing. 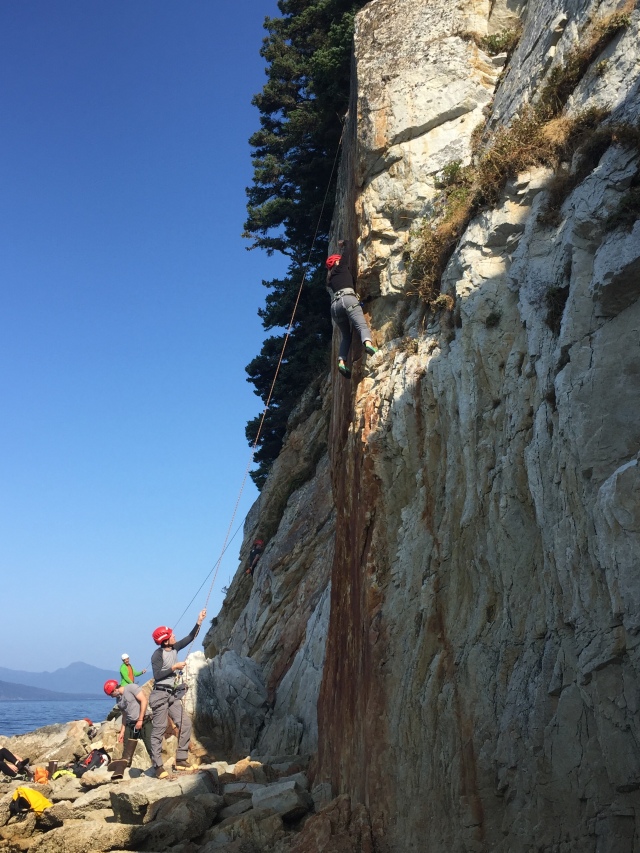 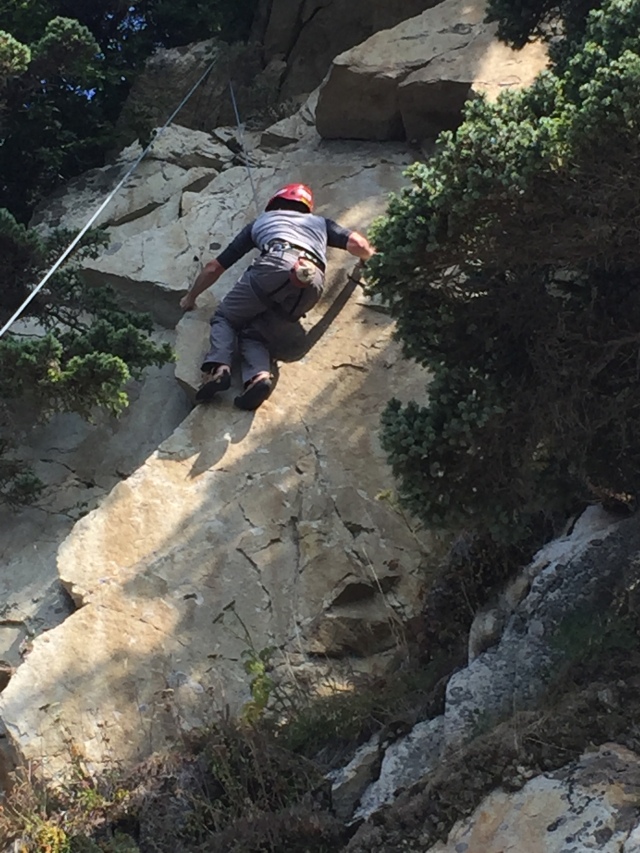 KISAR will hold its monthly general membership meeting this Thursday August 15 at 7:00 pm at Bayside Fire Hall. The Kodiak Deputy Fire Chief , Frank Dorner, will go over both arm and leg vacuum splints that have been added to the KISAR cache.

Posted on 2019/07/16 by kisar1986
KISAR will hold its monthly general membership meeting this Thursday July 18 at 7:00 pm at Bayside Fire Hall. After the meeting Philip T will talk about light-weight camping gear and a proposed backpacking route from Sharatin Mountain to Heitman Mountain which will include multiple route variations, suggested campsites, and bail options.

For July’s training, KISAR is extremely pleased to have Paul Anderson return to Kodiak to teach a course in Initial Response Incident Commander topics of search and rescue. Paul has visited Kodiak to teach search theory and practicals for KISAR before and is always extremely informative, and he literally ‘wrote the book’ on IRIC. The dates will be July 5-7. Contact Steve for more info at 907-539-2299.

On the night of Thursday May 9, KISAR received a call from the Alaska State Troopers Search and Rescue Coordinator in Anchorage requesting assistance with the recovery of two victims of a vehicular accident in Dutch Harbor. Early the following morning, KISAR members collected the required equipment and drove to the USCG Air Station in Kodiak where a C-130 aircraft was available to transport them to Dutch Harbor as part of a previously-scheduled flight to Adak.

The KISAR members arrived in Dutch Harbor at approximately 9:30 AM and were met at the airport by the Alaska Wildlife Troopers, Unalaska Police Dept, and Fire/EMS personnel. They were immediately transported to the scene of the wreck at Ulakta Head on Amaknak Island on the north side of Mount Ballyhoo (53.924 N, -166.517 W). A vehicle had allegedly lost control and plunged from the cliff top, descending 900 feet down a ravine to the shoreline below. Two fatalities were reported from the wreck; one victim was located approximately 1/3 of the way down the ravine, and the other approximately 2/3 the way down. The ravine was precipitous, deeply incised, and characterized by loose rock and steep walls.

Using a main-line lowering system and backup belay, a KISAR member was lowered with a rescue Sked litter into the ravine while the other directed the rope work from the top. It required approximately 500 feet of rope (three ropes tied together) to reach the first victim. The victim was recovered and was raised along with the KISAR member to the top of the ravine by approximately 2:00 PM.

After consultation with local public safety personnel, it was decided to walk along the shore from the pot storage yard at the north end of the embayment of Dutch Harbor to reach the lower end of the ravine to access the second victim. Two KISAR members ascended the ravine towing a rescue Sked litter and carried a rope and basic equipment. The rock in the ravine was extremely loose and unstable. After approximately 400 feet of climbing, the second victim was located, recovered, and subsequently lowered back down to the beach. Public safety personnel positioned a patrol vessel just offshore and ran a rope to the beach with a small raft for transport back to the harbor. All personnel were back at the vehicles by 7:00 PM.

The Unalaska Police Department, local Fire & EMS, and Alaska State and Wildlife Troopers provided much-needed, willing, and professional assistance to KISAR personnel in all stages of the recovery operation. The USCG generously providing use of the C-130 aircraft and making a stop in Dutch Harbor was instrumental in KISAR’s timely deployment.

KISAR very sincerely extends its condolences to the families and community of Unalaska – Dutch Harbor for the tragic events surrounding the accident and we were honored to be able to play some small part in the resolution of the incident. 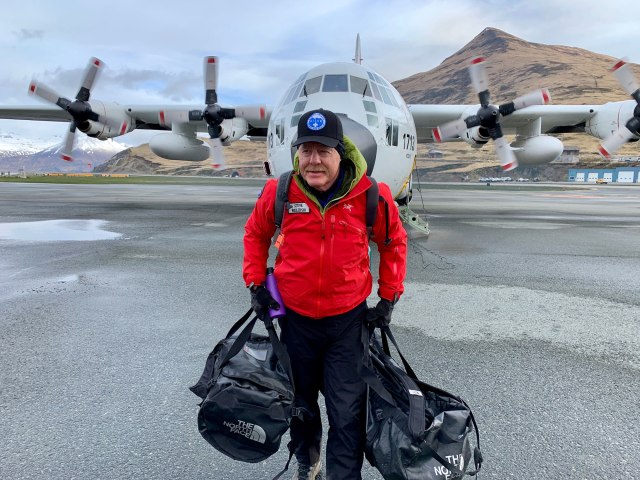 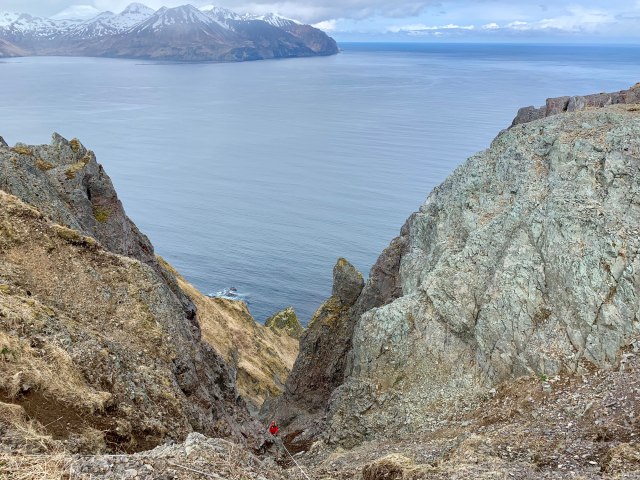 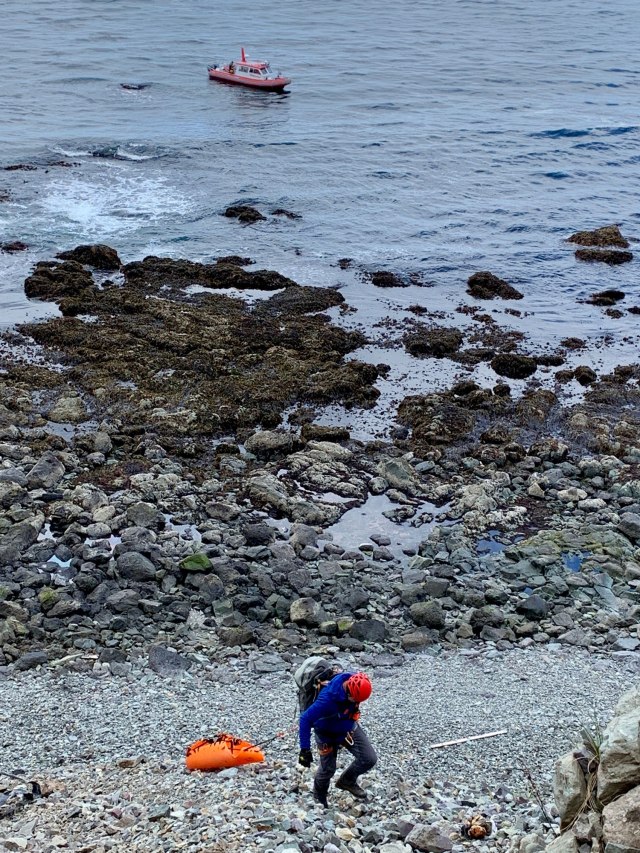 Following Thursday’s helo orientation on the CG base, 3 KISAR members flew up to the KISAR training hut on Friday to assess snow conditions and prepare a training scenario. On Saturday the USCG Air Station Kodiak flew a KISAR team to the site in a call-out simulation to recover an injured skier. KISAR members practiced deployment from both H-60 and H-65 aircraft and used both the rescue basket and litter for hoists. Following the scenario with the USCG, KISAR members trained with Blaine Smith of the Alaska Avalanche School in ice ax and crampon use and safety, setting up a fixed line on a steep snow slope to reach an injured subject, and then to lower the subject off the slope. As the weather deteriorated in the afternoon, all members traveled down out of the mountains on ski, snowshoe, and foot to reach the road. We would like to offer a huge thanks to the USCG Air Station Kodiak and Blaine Smith for a fun, productive and informative training! 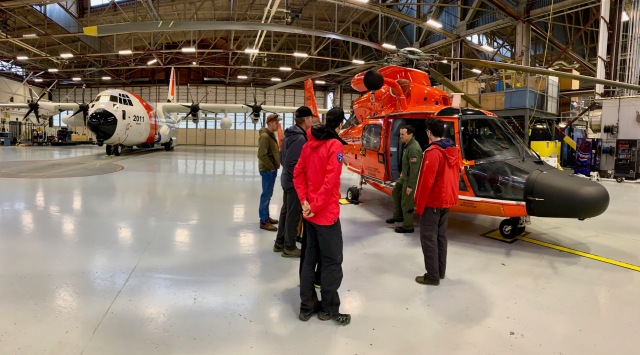 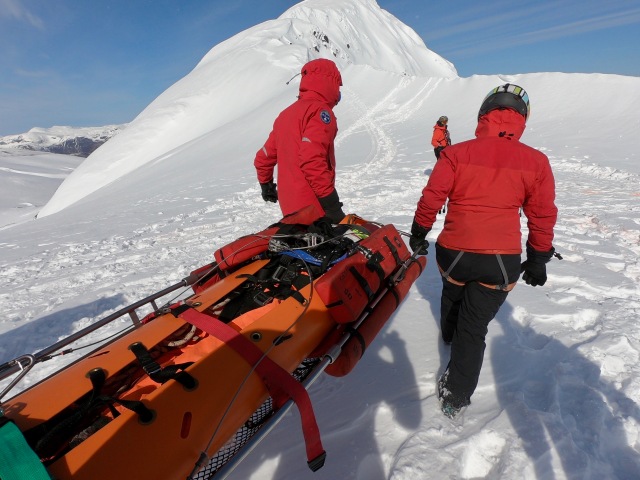 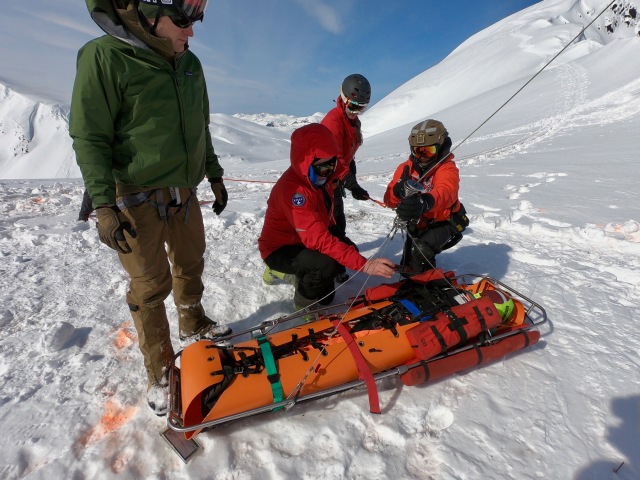 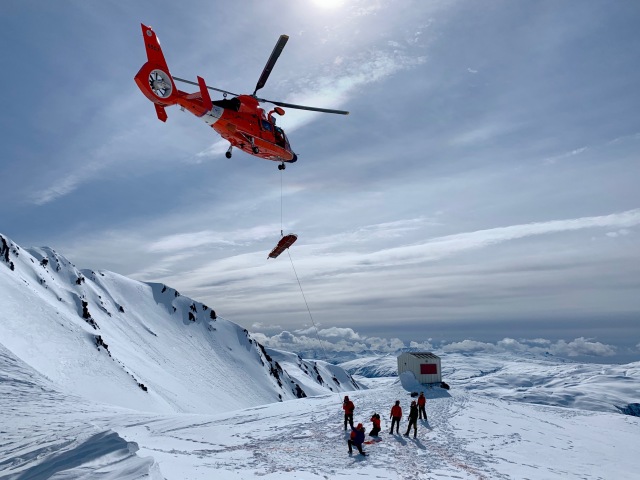 All KISAR members meaning to attend the weekend training on 4th of July Peak on April 27-28 must have attended the April 18 general meeting and must also attend the USCG helicopter orientation at Hangar 3 on the USCG base on Thursday April 25. We will coordinate (via email) carpools to the main base gate where we will rendezvous with base personnel at 7:00 PM. We will discuss the weather forecast at that time and make any needed amendments to the weekend training accordingly. 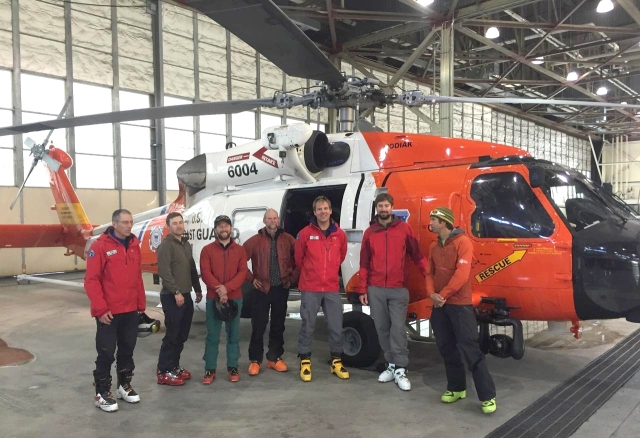