KISAR members Steve and Sharon Wielebski were on Pyramid Mountain at the time that three hikers, a woman and her two young children, went missing and the Wielebskis initiated the call out. The Wielebskis had seen a 3rd party of hikers on the mountain and later encountered those same people again in the parking lot after the hike. The 3rd party said they were waiting for the woman and her 2 children who should have been down by that time. The Wielebskis did not encounter the woman and her children on the trail and became concerned that they may have accidentally lost the trail and gone down a different side of Pyramid in limited visibility on the upper mountain due to clouds. They called KISAR member Philip Tschersich around 9:30 PM from the mountain and he passed the info along to KISAR member Nick Szabo. Szabo contacted Trooper Page who was aware of the incident. Szabo investigated via Facebook and determined the lost adult was friends with a KISAR member and was able to contact the lost person’s father, who was able to provide the lost person’s address. The lost person’s vehicle at the Pyramid parking area had a flat tire and there was reason to believe that the family may have left the area via the road or another vehicle due to the tire. The Wielebskis also informed Military Police at the USCG base and the Air Station prepared to launch a helicopter. KISAR started going through their roster to find out who was available. Tschersich turned the KISAR point-of-contact duties over to Szabo at that time. We had identified KISAR members Michael Gibbs, Kyle Setta, Lydia Cullum, and Tschersich as available, and the Wielebskis were already on the scene. The Wielebskis only had a cell for comms. When Tschersich arrived at the Pyramid parking area there was a Trooper on the scene. Gibbs was there and Setta soon arrived. Cullum was about 45 minutes out due to logistics. The Trooper had a radio with Trooper Simplex 1 (155.250 MHz). KISAR planned on using that frequency until a CG helicopter arrived and then KISAR planned to switch to VHF 23a (157.150 MHz). Some KISAR members also had Garmin inReach units. Just as the KISAR party at the parking area started to climb the trail around 11:30 PM to assist on the mountain, the Wielebskis came into cell phone range and announced that they had the missing party with them and were descending. The USCG helicopter deployment was cancelled. KISAR members in the parking area could see their headlamps descending the upper Jibber Bowl and climbed up to meet them. KISAR handed out more headlamps and all descended together. Cullum arrived soon after and joined the group on the descent. All parties were back at the Pyramid parking lot by 1:00 AM. 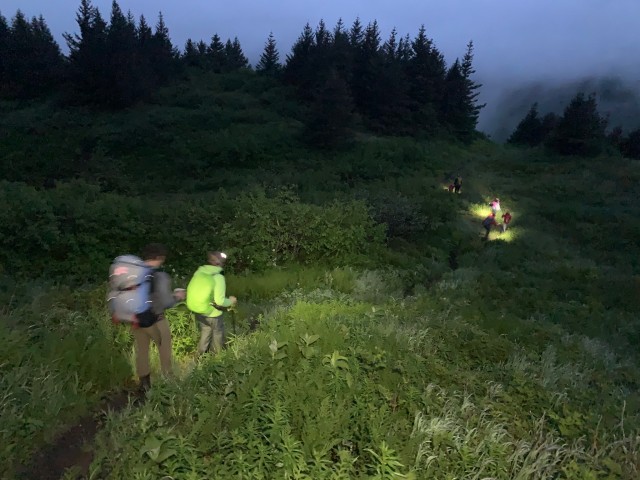 Kodiak Island Search & Rescue (KISAR) is a non-profit organization whose objectives are exclusively charitable, scientific or educational. Specifically, our purposes are: To furnish highly trained volunteers and dog teams for search and rescue for the benefit and welfare of the community To organize and support the continuing education and training of volunteers, dog teams and support personnel in accepted search and rescue methods. To increase public awareness of search and rescue trained volunteers and dog teams and provide informational and educational programs and demonstrations to institutions, agencies and community organizations.
View all posts by kisar1986 →
This entry was posted in Uncategorized. Bookmark the permalink.